Welcome to the Male Choirs Association of Australia (MCAA) web site. The MCAA was formed in 2007 by eleven male choirs in New South Wales and the ACT. These choirs wanted an organisation which would coordinate and organise male choral activities across Australia, arrange massed choir concerts, liaise with other national choral organisations, assist is the organisation of tours and to act to the mutual benefit of all member choirs.

This Association also aims to promote social contact between member choirs through social and musical events.

A NSW association of male choirs was ‘re-born’ in Sydney in 2006, after an earlier national association had failed. A foundation meeting at the Pitt Street Uniting Church on 17th November 2006 elected Ron Brown (Sydney Male Choir) as President.< 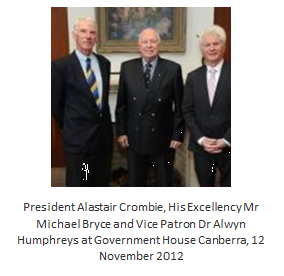 The new association inherited the modest bank balance of its predecessor, which became the vital ‘seed capital’ to enable a start on our first biennial male choirs festival. It was soon decided to ‘go national’ and adopt the name Male Choirs Association of Australia. Canberra was invited to host the first festival, the task being taken up by the Australian Rugby Choir and the Canberra Men’s Choir.

In the years since it’s revival the association has grown from an initial seven to around twenty members, with all jurisdictions except Tasmania and the Northern Territory represented. The national massed male voice concerts have become a significant event on the national choral calendar, with great potential for further development in the coming years.

MCAA was honoured to have His Excellency Michael Bryce as Patron until March 2014, and Dr Alwyn Humphreys as Vice Patron for the past eight years. 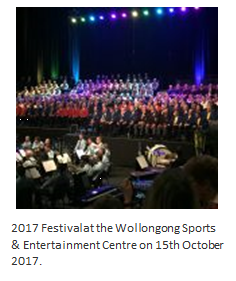 MCAA is now planning its sixth biennial massed male voice Festival to be held in Sydney from 30th to 31st October 2021. Earlier Festivals have been as follows:

Through the initiative of indefatigable Secretary Bev Glover, Dr Alwyn Humphreys agreed to come to Australia as guest conductor for our first festival in November 2008 – ‘Maestro and the Men’. A choir of 220 or so, supported by the Hall Village Brass band, the Woden Valley Youth Choir, and distinguished soloists Louise Page, Christina Wilson and Lucas de Jong presented a fine concert which attracted nearly 1100 people to Llewellyn Hall at the Australian National University.

The second festival – ‘Alpha’s Males’ – was staged at the Sydney Town Hall in November 2012 with Alpha Gregory, Musical Director of the Woden Valley Youth Choir, as Guest Conductor. Ten choirs were represented, including the Wellington Male Voice Choir from New Zealand. The massed choir was supported by the champion Warringah Concert Brass Band and organist Peter Kneeshaw. Marion Arnold of ABC FM radio graced the occasion as an exceptionally well-informed compere, with the Festival being organised by the Sydney Male Choir. Our Patron, His Excellency Michael Bryce, attended.

The 2012 Festival, again titled “Maestro and the Men”, was organised by members of the Melbourne Welsh and Australian Welsh Male Choirs and was marked by the popular return as Guest Conductor of Dr Alwyn Humphreys from Wales. The massed choir of nearly 400 choristers was supported by the venerable Kew Band, organist Jonathan Baker, and soloists Lucas de Jong and Houston Dunleavy. The concert was opened by our Patron His Excellency Michael Bryce.

Our fourth festival ‘Let all men sing’ had a record sized choir and audience. The visiting Guest Conductor was Dr Guy Jansen (New Zealand) and the choirs were supported by the Band of the Royal Military College Duntroon and soloist Sarah Carvalho. The festival was a fundraiser for ‘Soldier On’, chair Peter Leahy, former Chief of Army, attending to receive a cheque from MCAA

Our fifth festival, and again called “Let All Men Sing”, had a massed choir of 330 choristers from 14 choirs including one from New Zealand. The MCAA chose two young conductors from within the MCAA choirs after Richard Gill withdrew due to illness. Tom Buchanan and Keiren Brandt-Sawdy demonstrated wonderful energy, enthusiasm and skills in their conducting and won the hearts of the massed choir members. Our accompanist was Emily Leong on piano and we were fortunate to have the NSW Police Band to accompany us on some of the numbers and also The String Family who were very popular with the 1350 people in the audience. A bucket collection was taken for Prostate cancer.

Following the success of the Wollongong concert the association decided to go full circle and return to the Sydney Town Hall. Planning got underway and the concert was planned to take place in November 2020, but Covid got in the way and the concert was postponed. The Committee has determined that the reinstated concert will take place on 31st October 2021, but will keep monitoring the Covid situation to ensure the concert only proceeds in a safe environment.